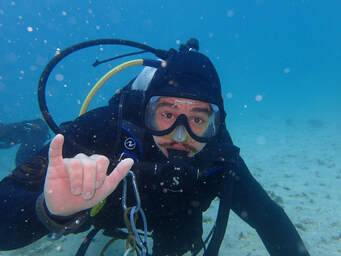 ​During his time as an undergraduate, Darrin worked for the National Marine Fisheries Service as a research intern examining how reproductive output and percent larval deformity varies in blue and brown rockfishes exposed to different levels of dissolved oxygen. In 2016, Darrin obtained his B.S. degree in Marine Science from California State University, Monterey Bay. He then worked as a research assistant on a long-term NSF funded project based on Santa Catalina Island. While on the island, he examined the impacts of size-selective mortality and fishing pressure on the reproductive output and demography of two, sex-changing goby species. Darrin plans to expand his knowledge of anthropogenic disturbances during his master's thesis research examining the effects of pH on reproductive behavior of the bluebanded goby (Lythrypnus dalli) and Santa Catalina Island.
Email: dambat9027@sdsu.edu